The town of Copalis sits quietly along the coast, having seen better days during the logging and fishing industry heydays. Unassuming and small, Copalis doesn’t look like the type of place where amazing scientific discoveries should occur. However, looks can be deceiving. 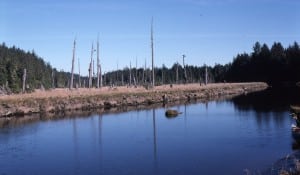 The Ghost Forest is located less than a mile up river in Copalis. Photo courtesy Brian Atwater.

Less than a mile upriver from the bridge crossing the Copalis River on Highway 109, a forest of dead trees, known by locals as the Ghost Forest, helped not only solve the mystery of the Japanese tsunami of 1700 but also has given us insight about tsunamis right here at home. The Ghost Forest of Copalis isn’t just someplace that scientists study, it is a location that we can all access, and a unique destination for visitors from around the world.

On the evening of January 26, 1700, a magnitude 9.0 earthquake rocked the Washington coast off Grays Harbor, causing the land to instantly drop in elevation by up to 6 feet around the region. The quake occurred on the Cascadia Fault, which stretches from North Vancouver Island all the way to Northern California and saw over 622 miles of land get moved by an average slip of nearly 70 feet. The 1700 earthquake on the Cascadia Fault, located off shore and under the Pacific Ocean, caused a tsunami that not only devastated the local areas but killed over 15,000 people across the ocean in Japan…read more here http://www.graysharbortalk.com/2014/10/15/ghost-forest-copalis/