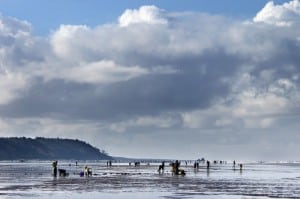 Razor clam season brings joy to those who enjoy watching tides and standing on the windswept, often wet Washington Coast. The beaches this year are packed with clammers, as all signs are pointing to this being the best clamming season in more than three decades. Early estimates from the Washington Department of Fish and Wildlife (WDFW) are looking extremely promising even compared with last year’s amazing clamming season.

Last season’s clam dig was the largest since 1982. In the 2013 clam season, more than 6.3 million clams were harvested along the coast of Washington State. With the majority of those clams coming from the beaches of Grays Harbor. This season, the officials at WDFW are anticipating an even better year. Nearly half-a-million dig trips were recorded last year, resulting in an average of 13.9 clams per digger. Those numbers, according to the WDFW reflect a spectacular razor clam population.