Most girls, at the age of five, when faced with choosing either a race car or a pony would choose the pony. Not Ariel Biggs. When her dad gave her the choice, Ariel chose a quarter midget – a small, caged, go-cart type race car. At age six, she began racing and today is going round the track faster than ever. Her dad’s love for cars and passion for building and fixing them was infectious. Ariel not only drove, but learned about the insides of her car and how to make them run correctly when broken. 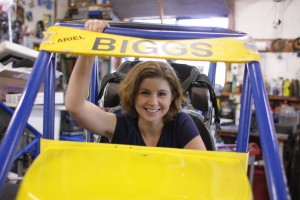 At age 13, Ariel won her first Extreme Winged Sprint Series Championship in Oregon on the dirt track and shortly after, Don Emery became her first “car owner.” As her sponsorship base grew, however, so did Ariel’s challenges. “I’ve grown up with girls who get pushed around on the track, but my dad always said to me, ‘you’re not a girl – you’re a race car driver.’ Because of that, I’ve always gotten along fairly well. But I’ve had people laugh at me and walk away when I’ve told them that I race cars – all because I’m a girl,” explains Ariel. “Having people laugh at me has driven me to work harder. I think it’s fun proving people wrong.” As a woman in a primarily male-dominated arena, Ariel has had to work hard to earn respect.