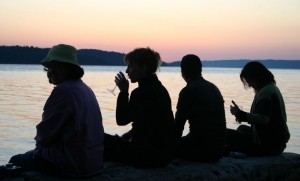 Seattle’s Pike Place Market is known for its famous flying fish, but if you ask a tourist where that fish came from, do you think he or she would know the answer?

West of Seattle is a region rich in native fish species, heirloom vegetables, and traditional, local foods found only in the Pacific Northwest. With miles of shoreline and acres upon acres of farm and forestland, Washington’s Olympic Peninsula and the Grays Harbor region are a gastronomic haven brimming with restaurants, wineries, markets and farms all stocked with fresh and local foods.

From heirloom Ozette potatoes to the coast’s prized razor clams, the region’s bountiful offerings are twice as toothsome when prepared by the hand of experienced food producers and chefs. Steve Shively, Membership and Marketing Director for the Olympic Culinary Loop — a unique group that represents the four counties united by the Olympic Peninsula and celebrates Olympic coast cuisine and the traditions that surround it — says the outstanding foods that are found in Grays Harbor are made even better thanks to the local experts and rockstar chefs who take these foods one step further. Shively says Taylor Shellfish and Brady’s Oysters are two good examples of this, as their outstanding selections of shellfish have developed a reputation that is respected not only by Pacific Northwest palates, but by the appetites of shellfish lovers across the globe.  Read more here http://www.graysharbortalk.com/2015/06/01/grays-harbor-culinary-tour/