It’s a perfect time to “stop and smell the roses” at the Burton C. Ross Memorial Rose Garden in Hoquiam.

Located on the grounds of the Polson Museum on Riverside Avenue in Hoquiam, the garden’s iridescent blooms have a story all their own. Chapters include the Grays Harbor Rose Society, community involvement, volunteerism, and a Civil War monument. 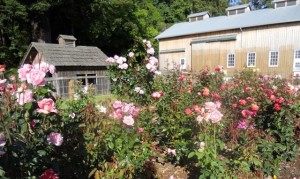 The Burton C. Ross Memorial Garden was planted in 1978 by members of the Grays Harbor Rose Society. Fourteen members donned rain gear and shovels and “labored in a downpour of rain such as only Grays Harbor residents can understand,” writes GHRS member Haidee Ross Douglas in 1980. Ross-Douglas continues, “… when they had finished that day, the first 75 roses had been planted in the bed to be named the Burton C. Ross Memorial Rose Garden –a tribute to a deceased Hoquiam member.”

The “deceased Hoquiam member” was Haidee’s husband, Burton C. Ross. The garden bears his name. Ross’s family contributed some of his own award-winning specimens for the garden.  Read more here:  http://www.graysharbortalk.com/2015/06/10/polson-rose-garden/