The Lady Washington is most recognized as the ship, the HMS Interceptor, in the film “Pirates of the Caribbean: The Curse of the Black Pearl,” but its cultural and historical significance to Grays Harbor is much more than just something seen on the silver screen. In the late 1700s, the original Lady Washington was the the pride of our young nation, flying the stars and stripes in parts around the planet for the very first time. 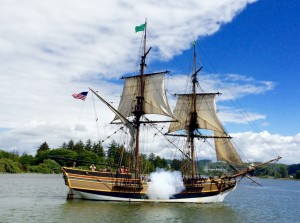 Named for Martha Washington, President George Washington’s wife, the original ship sailed the world, becoming the first American ship to round Cape Horn and make landfall on the Oregon coast. In the 1790s, the original Lady Washington was the first American-flagged vessel to visit Japan, Honolulu and Hong Kong. For a decade, the beautiful boat sailed the oceans and rivers of the world before wrecking off the Mestizo River in the Philippines in 1797.

For nearly 200 years, the Lady Washington was lost until a replica was built in 1989, just in time for Washington State’s Centennial celebrations. Often docked in San Diego, or other ports along the west coast, the ship returns home a few times each year, giving those living in Captain Gray’s namesake harbor a chance to travel back in time and sail on a tall, wooden vessel.  Read more here:  http://www.graysharbortalk.com/2015/06/21/lady-washington-tour-cruise/