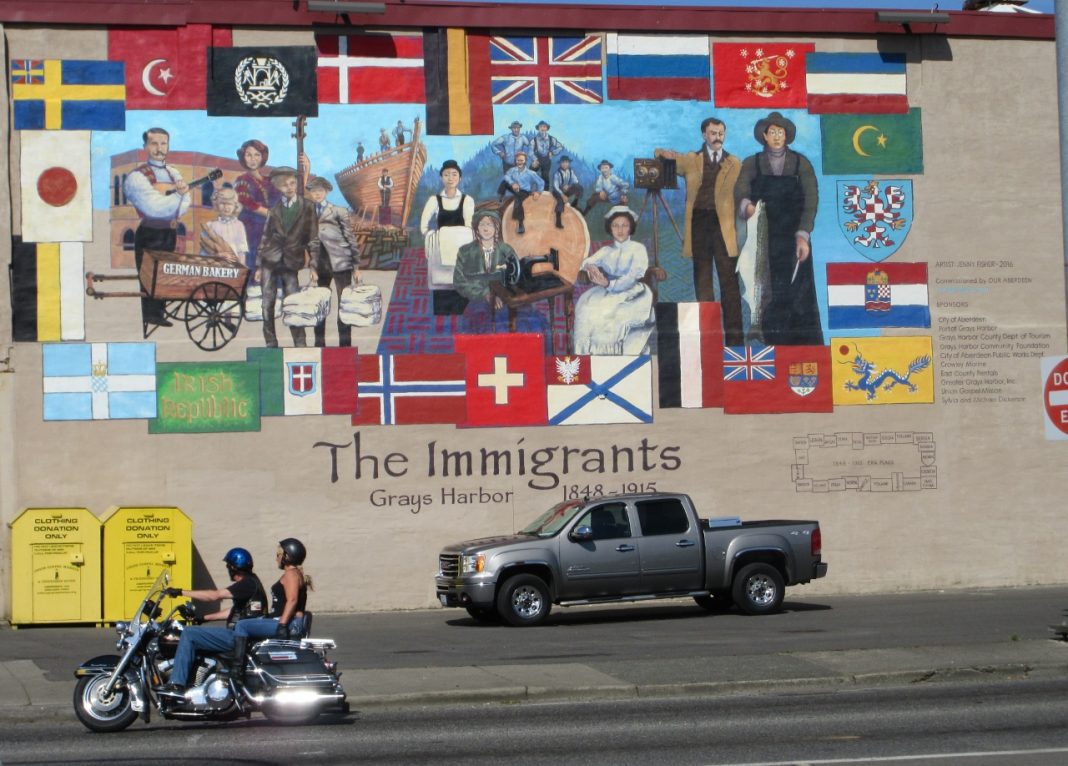 Aberdeen is witnessing art growing on formerly ugly, bare walls. Murals are being created along the downtown corridor. A spectacular piece titled ‘Immigrants’ has just been completed by Hoquiam artist Jenny Fisher. Its bright colors are glowing in the July sunshine transforming the formerly naked western wall of the Union Gospel Mission.

The history of murals in Grays Harbor began in 1988 when the county received funds for 40 murals in honor of the State of Washington’s Centennial Celebration. The ‘History of Transportation’ mural at the downtown bus station is one of the five surviving Aberdeen paintings. Sadly our damp coastal climate destroyed five of the ten original centennial murals.

In 2012, the deteriorating ‘History of Transportation’ was restored by artist Jenny Fisher 25 years after she had created it. Another centennial piece, ‘Aberdeen, Washington, 1889-2014’, on the wall of the south side Swanson’s grocery store was restored by Gavin Miller in 2012-13. The original artist, Bob McCausland, had passed away.

The restoration of historical murals is happening thanks to the hard work and initiative of the people of Our Aberdeen, a nonprofit organization founded in 2009. Sylvia Dickerson chairs Murals on the Map, one of the committees of Our Aberdeen’s Art Promotion Group directed by local artist and board member Mery Swanson.

Sylvia believes public art is very important. “We want to enable people to do projects that create community pride and entice people passing through to stop and see what Aberdeen has to offer. We have a thriving art community to build on.” The particular goal of Murals on the Map is to “restore, document and create new murals throughout the downtown corridor.” They have accomplished much.  Read more here:  http://www.graysharbortalk.com/2016/07/16/our-aberdeen-murals/