You’ll never forget the first time you spot a whale. From the initial sighting of the spray rising from the ocean swells, to the smell of the fishy odor of the spout, your first glimpse of a whale is something that you reminisce about for your entire life. Every April, just off the breaking waves along the Washington Coast, 18,000 gray whales make their way slowly up the Washington Coast. Heading north to the cold, food-filled waters of Alaska, the gray whales have returned, and can be spotted in an endless series of pods from late March to early May.

Gray whales are huge, weighing up to 80,000 pounds and measuring up to 49 feet in length. Living up to 70 years, feeding mostly on tiny shrimp-like animals that dwell in the ocean floor, the whales make this migration every spring, with newborns lingering behind them. The entire migration is amazing and visiting in person is strongly encouraged. Whale watching can be a highlight of the spring; a timeless tradition passed on to generation after generation in hopes to have better harmony and understanding with nature.

It might seem daunting to find a whale in the ocean, but you don’t need a sense of vengeance like Captain Ahab to track down these massive mammals. Instead, all you need is a sense of adventure, a day of exploration and a few tips on how and where to see gray whales off the Washington Coast.

Learn about Gray Whales and Whaling

One great destination to learn about Gray Whales and their historical importance to the local economy is the Maritime Museum in Westport. With an entire room highlighting Grays Harbor’s whaling past, including locations, pictures and relics from the long past days, the museum is a perfect stop on your Westport whaling adventure.The ranger station and resort at Olympic National Park’s Kalaloch region also has some information about whales, including occasional talks from NPS rangers about the migration and whales. Contact the park to discover the locations and dates of these talks.

Further north, the Makah Museum on the Makah Reservation at Neah Bay has one of the best exhibits in the state on local tribes, whales, whaling and the connection between whales and local survival. The drive to get here might be a bit long, but combining a stop at Cape Flattery with the museum will almost guarantee you a whale sighting off in the distance.

In Grays Harbor, opportunities to see gray whales during the spring months are quite prevalent. While you can stand on the coast and scan around for hours with a spotting scope or pair of binoculars, the best bet to see a gray whale is with the tours offered by Ocean Sportfishing Charters in Westport.  Read more here :  http://www.graysharbortalk.com/2016/04/06/whale-watching-washington-2/

One of the major benefits to living in Grays Harbor is the proximity to so much natural beauty. The area is a gateway to miles of exquisite beaches, majestic forests, and the awe-inspiring Olympic Mountains. Nature surrounds Grays Harbor, beckoning hopeful explorers. But sometimes exploring the wilderness with small children and knowing just where to go can be a bit daunting.

In particular, the Olympics can be difficult to access. In general, those seeking mountain adventures must hike for several miles to penetrate them. One easier way to admire the mountain scenery with younger nature lovers in tow is at Wynoochee Dam and Lake.

Located at the mouth of the Olympic Mountains, Wynoochee Lake is a hidden gem. The dam and day use area make a perfect destination for families looking for a day trip. The dam is a little over one hour’s drive from Aberdeen. There are no commercial services in the vicinity, so it is best to pack and plan accordingly. Cell phone coverage can be spotty, and although a pay phone is available, be sure to prepare for that as well.

There are picnic tables, covered areas, a partially paved trail along the lake, and heated restrooms, which are a real treat on cooler days.  Read more here:  http://www.graysharbortalk.com/2016/03/31/wynoochee-lake-dam/

As a parent, you may feel conscientious about taking your kids to a restaurant or out to eat. However, finding the right place can make all the difference. Whether you are looking for a sit-down restaurant or takeout, there are numerous places in Grays Harbor that are kid-friendly and ideal for a family meal.

Grays Harbor is fortunate to have several outstanding restaurants with cozy family-style seating. These include Mazatlán in Aberdeen; El Rancho in Montesano, El Ranchon in Elma, and Las Maracas in Ocean Shores. Not only are these restaurants designed to be family-friendly destinations, they also serve chips and salsa as soon as you are seated, which is ideal for keeping your hungry crew busy and happy until their meals arrive.

Today’s ATVers aren’t what they used to be. Gone is the image of the helmeted, mud-splattered teenager tearing through the off-road landscape. “It’s not about going out in the woods and t 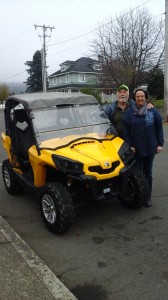 earing up the trails,” says JoAnn Haynie of the Grays Harbor ATVers. “We’ve never been people to go out and tear up the woods. We want to be responsible being outside, exploring and sightseeing and enjoying the outdoors with care.”

Montesano residents for over 50 years, Larry and JoAnn Haynie say Grays Harbor ATVers is an informal club with a common goal: enjoying the great outdoors and riding responsibly on All-Terrain-Vehicles.

“I like to get out in the open and putt along,” says JoAnn. “We love taking them (ATVs) out for a short little run around town. I drive in nice weather to the grocery store and do errands around town. Larry goes fishing. We like to take them out on the back roads and go on picnics, that sort of thing. They run on gas. They’re much more economical than a car.”  Read more here:  http://www.graysharbortalk.com/2016/03/08/grays-harbor-atv-trail/

In 1961, Grays Harbor was experiencing the beginning of the end of the timber industry’s economic boom. In just a few short years, mills would close and mill-workers would be out of a job, but for now, life was good in Grays Harbor County. The city of Ocean Shores had recently started to be built as a luxury “California-Style” community on the Washington Coast. Hollywood Stars, such as Pat Boone, were investing in the region and were greeted by thousands of fans when arriving at the Bowerman Field Airport.

That wasn’t the only thing Hollywood about Grays Harbor in 1961. Up in the deep gorges of the Wynoochee River, the people of Tinseltown were filming a movie. 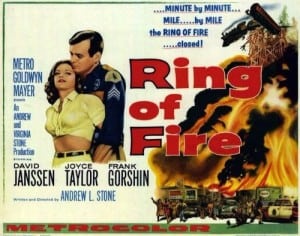 While the “Ring of Fire” movie may not have been a blockbuster, it left a permanent mark on Grays Harbor.

Earlier in 1961, a movie called “The Ring of Fire” was set in Washington State, but was being filmed in Oregon. Starring David Janssen (The Fugitive TV show) and Frank Gorshin (who played the Riddler in the original Batman), the plot of the movie was silly, centering on a police chase from Tacoma to Shelton and then through the woods of the Pacific Northwest during a wildfire. This disaster film ends with the couple fleeing the city on a train, only to have their train get stuck on a wooden bridge over a deep gorge.  Read more here http://www.graysharbortalk.com/2014/07/23/explore-ring-fire-movie-train-wreck/